Breitenhold is a side-project of Ced from Rocka Rollas, and this is the first album. Musically, its basically so similar to the main band that you almost wonder why it is being released under a different name. Maybe it's an excuse to get as much songs out as possible, and to not be forced to throw them away?


Anyway, since the new Rocka Rollas-album is so damn brilliant, it's hard to see any problem with an additional album of equally sounding music. Since they both were released at the same time, it comes naturally that you compare them a lot to each other, and I do find The Road To Destruction stronger than this. It takes a bit longer to get into as well, but once you've given it a few chances, the real potential in songs like Time Is Gone, To The Battle Far Beyond and The Windhorse Knight unfolds. The monumental closer Legions Of Breitenhold is a perfect ending to yet another very strong album. 8/10 /H
Posted by Lockyard at 3:21 PM No comments: This is the second album by these Italian maniacs, who appears in a different form compared to what fans of their earlier stuff might would have expected. While their previous album was pretty much all about Hellhammer/Celtic Frost-worshipping, this album is something completely different. Actually something as unexpected as a pure 100% heavy metal album.


The only traces that remains of black/thrash/black/whatever are basically the vocals, which makes it reminding a lot of the latest album by Pest (Swe). Desaster is mentioned in the press-release as well, and it sure reminds of what they did with Tyrants Of The Netherworld, but Barbarian are looking even further back, to a time when there were only heavy metal or no metal at all. With a clean voice, this could just as well have been some obscure heavy/speed metal album, with some evil elements, from 1983 or something. I think it's a very interesting move to look back in music history and create something more original than most similar bands.

So, to sum it up, this is definitely a very old school, yet fresh sounding album. Some might find the production a bit too clean, but myself I have no such problems. It makes the riffs and songs stand out and adds another bit of new thinking to the regressiveness. 7/10 /H
Posted by Lockyard at 9:05 PM No comments: 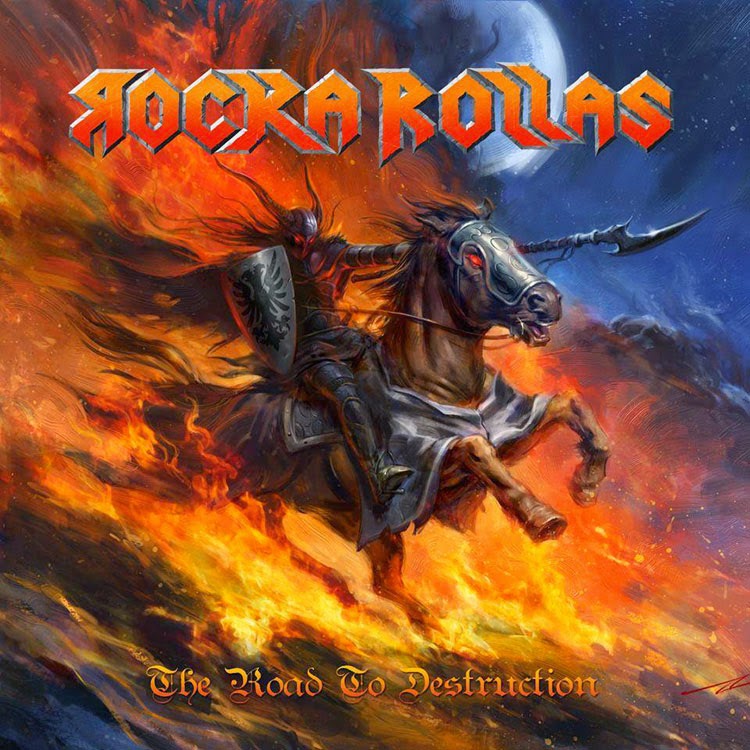 More goods delivered by the Stormspell camp, this is the third album by the project that now has turned into a proper band. Their earlier releases hasn't really taken me by storm to be honest, I liked the Blazon Stone- and Mortyr-albums much more than the previous Rocka Rollas-album. But when I heard the first samples from The Road To Destruction, it was clear that they were about to unleash something way more immense this time.

The riffs, the songs and the production are all simply spot on, and the fact that Ced has taken over the vocals himself this time is definitely contributing to the improvement, sounding like a mix of Kai Hansen (Helloween) and Bert Kivits (Emerald). Adding everything up, what you get is an album that's definitely one of the best of this year, and an album that takes Rocka Rollas right up to the top of the most interesting bands in Sweden right now. If they keep their current very active release-schedule, we hopefully have lots of more great albums to look forward to in a not so distant future. 8.5/10 /H
Posted by Lockyard at 1:24 AM No comments:

This is the new solo project of Albert Bell, known from bands like Forsaken and Nomad Son, two bands that have released some killer albums. So my expectations on what he have created on his own are definitely high.


First of all I have to praise the artwork and layout of this CD, it looks truly stunning. Almost worth buying for the cover and the booklet alone.
Musically, this is not at all in the same vein as his other epic doom metal bands. Well, the doom-part of it remains unchanged indeed, but otherwise this is way more dark and raw, rather than melodic and powerful as we're used to. It even reminds a lot of doom/mid-tempo oriented death/black metal-bands like Root, Beatification Of The Dead could almost be mistaken for the classic Písen Pro Satana the first time you hear it. It also sound a bit like Mortuary Drape, as well as the typical Italian doom-atmosphere in general, Abysmal Grief being a great example (Malta isn't that far from Italy, right?).
One of the few weaknesses on this album is the vocal performance, which is a bit bland and expressionless. Sure it's a one man project, and the vocals are far away from unbearable, but the rest of the music is just so great, the right amount of wickedness and mental derangement could have made the overall impression even better. Mr Bell should start to take some “vocal” lessons from Big Boss or Labes C. Necrothytus. I also wouldn't mind more vocals that are actually sung, and not spoken, like halfway into The Tears Of Ishtar, or the entire closing title track. At those parts, this album is at its absolute best. Anyway, what this album might be lacking in vocals is definitely given back in delicate riffs and well written songs, all in all it's an enjoyable experience. 7/10 /H

Posted by Lockyard at 5:10 PM No comments:

As if their killer new album We The Dead (one of the highlights of 2014, no doubt) wasn't enough, the first two demos of this forgotten German band has now been re-issued on vinyl! I got a CD-R with both of them from the band around the time the compilation of re-recorded tracks Go To Hell was released, three years ago, and since then I've been waiting for someone to release it on black (and coloured) wax. To finally have it in my hands is just fantastic, cheers to Ripping Storm Records for making it happen.

Side A consists of their first demo, which I find a bit inferior to what awaits on side B. Sure, the songs are all classics, but I'm having a bit of a hard time with the drums. They sound way too clean, just feel out of place and kind of ruins the rest a little. I prefer more recent the re-recordings of all these songs. The Nifelheim-style drumming about halfway into Go To Hell is evil as shit though, shame that they omitted that on the new version.

Now let's get to the main reason that this LP is so long awaited, side B and their second demo. A hidden gem of highest quality classic German black/thrash. Definitely in league with the early masterpieces by Sodom, Kreator and Poison's essential Into The Abyss. Poison actually appears on several old gig-flyers that covers the insert of this LP, those shows must have been something extraordinary. Anyway, you should now what we're dealing with here by now, a must have release, and nothing else. Get this, and their fantastic new album if you haven't done so already! 9/10 /H

Posted by Lockyard at 3:57 PM No comments:

Sundsvall tomorrow!
Posted by Lockyard at 12:47 AM No comments:

The second Critical Mass-compilation can is now up for streaming and pre-order right here. 偏執症者 (Paranoid) is paticipating with a new unreleased track that is exclusive for this LP.

The other featured bands are:
MORDBRAND, PAGANIZER, THE HIDDEN, BIRDFLESH, NIGHTMARE CITY, THE CHEAPSHOTS, THE PETE FLESH DEATHTRIP, JORMUNDGAND, INSANE, TOTAL INFERNO and SINNERS BURN.
Posted by Lockyard at 12:34 AM No comments: Stormspell Records did not only just release the new Hypertension-album on CD, as usual they've got a lot of interesting stuff coming out at once. One of the releases they have to offer this time is the first EP by the Portuguese band Deadly Force, who delivers some impressive heavy metal played the good old way.

The closest parallel to draw would probably be post-2000 Iron Maiden, much because of the fact that the vocalist Flavio Lino sounds a lot like Bruce Dickinson has done the last 15 years or so. But musically, this is way more traditional and down to earth, no 10+ minutes songs as far as the eye can see. Yet there's always still an epic feeling present though, who says songs must be super long to be epic? With that said, I still think that this band would definitely be able to create something more ambitious on future releases. It will be interesting to follow them, If you're a fan of Iron Maiden and their countless apprentices, you should check this out. And who doesn't like Maiden? 7/10 /H 2014 is starting to face the end, and I'm behind as shit on the reviews, but I'll give my best to hopefully post something about all the releases I've enjoyed during this year. Some might have been released almost a year ago, but whatever. First up, the latest album by the living death metal legends Autopsy.


Some critical voices may claim that releasing another album just ten months after last years The Headless Ritual seems a bit rushed. But since we're talking Autopsy here, I don't really see the problem. I find the fact that one of the songs are entitled Forever Hungry very appropriate. Since the re-union in 2009, they have given us new releases each year, always delivering the absolute best death metal you'll possibly find these days, and never lacking quality. Tourniquets, Hacksaws and Graves is no exception.

Fast and twisted rippers like Savagery, Parasitic Eye and the title track are combined with more mid-paced tunes like King Of Flesh Ripped and Teeth Of The Shadow Horde. And of course there are also some slow, filth crawling doom numbers, The Howling Dead and Burial gives you just what you need, and along with the rest gives form to an album just as fantastic as you could ever expect from this band. Although I love the other new albums as well, I think that this, along with the EP The Tomb Within, is probably the best they've done since the re-union. Hopefully their productivity will stay intact, and we'll get a new Autopsy-album in 2015 as well. 9/10 /H

Posted by Lockyard at 4:25 PM No comments: