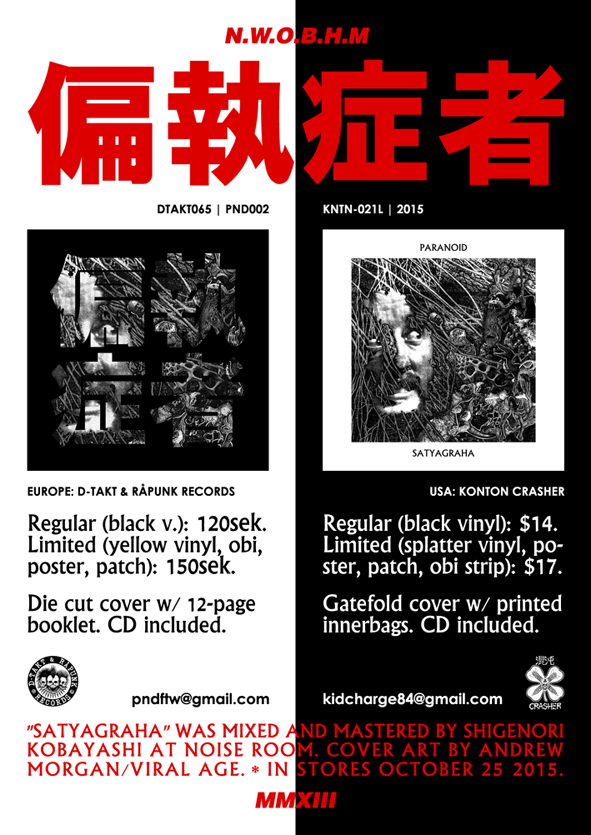 Posted by Lockyard at 4:26 PM No comments: Time for a bit of doom from down under. Zodiac's second demo starts of with a characteristic slow intro before, about a minute into The Noose, the most crushing and intense riff I've heard in a long time reveals itself and hits you like a battering ram. Once you've recovered from that, what awaits is three tracks of finest quality doom metal. Which might not say that much, since it's a very wide musical genre with many different approaches.

But to give you the best idea of Zodiac, I'd say that it sounds very British. Bands like Witchfinder General and The Lamp Of Thoth constantly comes to mind while listening to this tape. Some hints of Saint Vitus can also be found, and the final track Legacy reminds of more epic bands like Candlemass and Solstice. The observant people have probably noticed that I just mentioned five of the best bands of all time, so if that doesn't make you want to check this band out, I don't know what will.

Review: Ironsword – None But The Brave (Shadow Kingdom 2015 MC)

Portugal's metal warriors Ironsword are back after a few years of slumber with their fourth album. For me personally, this is the first of their albums that I've bought, but judging by the cover and album/song-titles, I was quite sure what kind of music I expected. And very well, the heaviest and most epic of metal in the vein of the eternal masters Manowar, Omen and Manilla Road is what Ironsword spends their time making. Rough, barbaric and only for those who think they're tough enough. The songwriting is overall great, most songs are memorable. The biggest strengh is that it's a very consistent album, which means that it maybe not reaches the highest of mights, but doesn't really have any actual lows/fillers either. The downside is that sometimes it just get too derivative of their obvious influences. In the title-track they have even borrowed some lyrics from Omen's Battle Cry. Sure, that may have been intended to be some kind of tribute, but it feels a bit unoriginal, if not a even a bit sacrilegious, to re-use the lines from such a monumental classic. Also, the opening Forge The Sword is almost on the borderline of stolen from Necropolis by you know who. Some of the backing vocalists are actually very reminiscent of Mark Shelton in an almost uncanny way. I think that's pretty cool though, since he doesn't really sound like that anymore. If Manilla Road needs a new frontman, this backing vocals-guy would probably be the man for the job. To wrap it up, original or not, Ironsword delivers a great heavy metal album worthy of none but the brave. The rest of their discography is added to my “check out” list. 7/10
Posted by Lockyard at 8:36 PM No comments: This split 7” contains one track each with two epic and superb Canadian acts. What I was most excited about with this release was definitely to hear the new track by Funeral Circle, whose self-titled debut album was one of the strongest releases of 2013.

When I heard the news that their vocalist had quit the band I was a bit worried, but that went by quickly when they announced that he would be replaced by JP from the magnificent Borrowed Time (RIP(?)). A match made by the gods, and the first taste of the new Funeral Circle, Hades Triumphant, is nothing but an outstanding anthem. Compared too their earlier material, it draws a bit more towards epic metal rather than doom, which I don't mind at all. Too many mediocre doom bands out there, and even though they earlier stood way above mediocrity, I think that this new chosen path will take them to all new levels. We need a new LP as soon as possible!

Gatekeeper is a new acquaintance for me, but the opening riff of their side of the split, Bell Of Tarantia, is just brilliant. Not much to complain about when it comes to the rest of the song either, epic and grand heavy metal just the way I love it. Definitely deserves its place on the same wax as Funeral Circle, really need to check out their split with Eternal Champion as well. I'll post a review of that here as well when it happens.
Posted by Lockyard at 10:08 PM No comments: